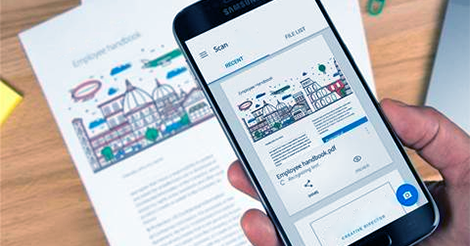 An OCR App or Optical Character Recognition software helps in the conversion of pictures to text. The OCR technology analyses any image or document and compares it with all the fonts that have been fed into its database and by matching particular features of a font typical to its characters.

A few of the OCR driven software also process it through a spell checker so that unrecognisable words could be guessed. While it is less accurate, the most accurate approximation is what is required from the software.

OCR software can provide a helping hand to researchers, students, as well as companies and professionals.

List of 7 best OCR Apps for Android and iOS

Office Lens is one of the most advanced apps developed by Microsoft. This means it already comes integrated with the other Office suite apps. Office Lens has a powerful OCR scanner and works with Docs, Excel, OneNote, PFD and PowerPoint.

Office lens provides a number of adjustments for scanning print paper, whiteboards, photos and business cards, where it employs a technology which removes the glare and adjusts the brightness for accurate results.

Pros: With Office Lens, users can scan and save everything on OneDrive while also being able to edit converted texts in Word or OneNote. Hence it can also be aptly called the official OCR software for Windows 10. It is one of the most important tools for people who use Office 365 as it is really easy to use and works smoothly, without interruptions by ads, as is the case with some of the best free OCR software.

Cons: It doesn’t work to its full potential without Office 365. So, if you’re not an Office 365 user, it is wise to use a different OCR Software. Also, while Office Lens is free, MS Suite isn’t.

Final Thoughts: I would only recommend Office Lens to 365 users. You can’t go wrong with this app if that’s the case. Easy to scan, store, and search everything in the cloud.

Text Fairy is without a doubt one of the best OCR apps available in the market today. It does exactly what it is built for. This is one of the few free OCR software apps that come without any ads. It has one thing that Office Lens lacks; the feature to correct image perspective.

Let’s assume that you are scanning the pages of a book and it is bent in the center. Text Fairy will automatically correct its viewing angle, scan the image and correct it.

This enhances the accuracy of text scanning. After this, it gives you the option of editing the text, in case of any minor discrepancy and then you can export it to PDF.

Unlike Office Lens, Text Fairy’s OCR scanner software works only with printed texts and it doesn’t support handwriting. However, on the flipside, it identifies around 50 languages.

Pros: It autocorrects image perspective, supports more than 50 languages, and exports to PDF. This OCR scanner software doesn’t have ads and is completely free. Users also get a text to voice feature.

Final thoughts: Text Fairy is one of the most popular and easy-to-use apps with a minimalist design and an interactive UI. It is suitable for scanning, organising, and searching a limited number of documents.

CamScanner is an all-rounder best OCR app, which can be used for multiple tasks such as scanning documents and converting images into PDF. The advanced OCR features of CamScanner come only in the paid version, which although nominal, is inconvenient, especially when there are better apps in the market which are free.

It is less accurate than the other apps in the market and are prone to make mistakes. Another issue it has is that scanned texts cannot be edited in a .txt format file. That feature would require users to further purchase the premium version, which is about 4 times more expensive than the pro version.

Pros: It provides a cloud storage account which can be used to store all the documents and images. It also provides good support and the UI of the app is convenient to navigate. CamScanner is one of the best OCR app for iOS.

Cons: Its OCR system is somewhat less accurate as compared to the other apps in the market. Apart from this, it is very limiting, and its full potential is only unlocked by paying a fee, when the same features are available free of cost in the other apps.

Final Thoughts: It is wise to buy the premium version to avail all its features. This will also enable the cloud storage option, which you can use to store your documents.

Google Keep is a strong contender of Evernote and OneNote, with a reservoir of tools for taking notes, storage options and of course, OCR. Being a product by Google, this Google OCR App is in the same integration network as Docs, Calendar and all the other services provided by Google. And like OneNote, the app is free and flashes no ads.

In spite of being a neck-to-neck contender of OneNote and Evernote, it is a bit different from them.

Google Keep was initially introduces as a minimalist note taking app by Google. It provides the users, the ability to scan images with texts and then to “grab the text” with the help of the three dots on the right-hand panel of the screen.

One it has captured the texts; users can add texts to the note which are easily searchable and editable. The best part is it can easily be exported to Google Docs.

Pros: Google OCR app is free and easily accessible, especially if you have an android phone. Apart from this, it is pretty accurate with a very small margin of errors.

Cons: As discussed, since Google Keep isn’t exclusively an OCR app, one needs to copy-paste items to a new document manually. In addition, Google Keep requires an active internet connection to process the images.

Final Thoughts: Google Keep is one of the best OCR scanner app for Android by Google because it has everything you need including cloud storage and cross-platform compatibility and sync for free. It is more useful if you need a kick-ass note app.

PDF Scanner, although is a standard document scanner which comes with some in-app purchases for receiving additional features, yet, its OCR technology is free. Users can scan images for text and then convert it into a PDF file quite easily.  Like other apps on the isle, it also lets users edit the texts before converting or saving.
What’s more; the app supports about 100 different languages and the cherry on the cake is that it doesn’t require an active internet connection to do its work.

Pros: It has a brilliant interface and supports more than 100 languages. It can be used even without an active internet connection.

Cons: It is prone to some errors and the free version has too many ads to ruin the experience.

Final Thoughts: PDF Scanner is a best OCR app for android which provides a free OCR scanner software. While the ads can prove to be distracting, users can upgrade to remove them.

Adobe is probably the most popular apps when it comes to managing documents, so it is not surprising that they would have a scanning app as well. Adobe scan enables its users to just point their camera towards the text and it will scan and detect it automatically.

With its advanced OCR technology, users can scan for texts inside documents seamlessly. It also provides a built-in editor so that the users can highlight, annotate, comment and edit texts on the go. Adobe Scan saves time.

Although Adobe Scan has a minimalist design, it comes with a 5 GB of online storage.

Pros: Adobe Scan is free and works without much margin or errors. It offers 5 GB of cloud storage space and its OCR technology is one of the best in the market.

Final Thoughts: Adobe Scan is probably the most advanced and user-friendly app. It does what it is meant to do and is free. However, it doesn’t support third party apps but considered as one of the best OCR app for android.

Smart Lens not only allows its users to scan various documents and convert the images into text, but it also helps translate those text into other languages. It can also be used to scan business cards where it can detect name, number, address and email id, and can also sort them systematically.

Users can convert and scan any image or document even if it is in a foreign language. It also includes a QR code reader which helps in availing offers and payments. The pro version, which is available for price, remove ads and allows users to use the app for unlimited number of scans.

Pros: It supports foreign languages apart from English and also comes with a language translator.

Cons: On the flipside, it doesn’t support handwriting notes such as CamScanner and Adobe Scan.

Final word: Smart Lens is good and can come in handy if you need to visit a different country, yet because it doesn’t support handwriting, it limits the users.

While all the apps mentioned above provide the image-to-text conversion, they differ in accuracy and in terms of the tools they provide. Hence, it is really important to choose an OCR App that suits your requirements so that you can make the optimal use of all its features, tools and other perks such as cloud space that come with it.

AutoCAD LT Review: What to Choose Between AutoC...

How Manufacturing ERP Can Help with Production ...

ERP for manufacturing industry has found a wider...