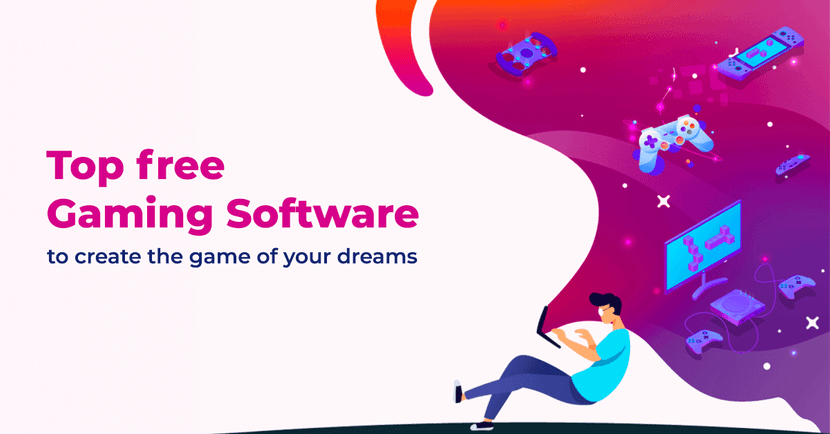 With free game making software available online, anyone can take the conquest to design the tool for ultimate entertainment.

We all love games, but have we ever thought what goes behind the scenes in designing our most favourite titles? It is well known that coding for games is one of the hardest things to learn in a lifetime.

Thankfully, technology has made it possible even for a layman to design their own video games in shortest time possible.

If you are interested to get into the know-how of the world of games, there are some sophisticated game development software using which you can make simple yet fun gaming platforms.

If you are a gaming enthusiast who wants to turn into a game developer too, here is a list of free game making software for beginners to design games without coding.

One of the Best Free Game Making Software

This means that in a game there are certain objects and you can add certain components to these objects. These components then define the behaviour of objects present in the game.

How Unity Game Maker Helps Design Your Own Video Game

Unity requires a functional knowledge of C#, but the availability of tutorial videos makes it suitable for beginners

Types of Games You Can Create: Unity is quite popular for creating 3D games, fantasy games and VR or AR-based games.

GameSalad software for game design is used for iOS as well Android platforms. GameSalad has largely been used to create interactive games that teach fundamentals of programming language.

Several games have been developed using GameSalad game making software for beginners such as Echoes of Aeons, Booger Boing, Beyond Solar Trailer, etc.  have ranked among the top 100 games in the PlayStore.

How GameSalad Helps Design Your Own Video Games

Level: GameSalad is suitable for beginners. The level keeps on increasing as the user keeps on learning new concepts.

One of the Best Game Development Software for Beginners

How GameMaker Studio 2 Helps Design Your Own Video Game

GameMaker free game making software’s free trial can be used for 30 days. Its Standard version is available for free. Other GameMaker versions are:

Level: Beginners can design simple games with GameMaker Studio 2. For complex games, functional knowledge of C would be required.

RPG game making software comes with preloaded characters, items, tile sets, etc. Users can even define their own graphics and add to the existing repository of characters and items.

How RPG Maker Helps Design Your Own Video Game

RPG game making software offers a trial version for gamers to get started with their dream of poker development and more.

Details of paid subscription are as follows:

Level: Beginners can design simple games. For professional developers, the knowledge of Ruby language is required.

GDevelop is one of the best open source game making software and provides several utilities for new as well as professional game designers. GDevelop is suitable for those developers that can’t dedicate too much time to design a game but don’t want to compromise on the creativity aspect.

How GDevelop Helps Design Your Own Video Game

Level: This game design software is suitable for beginners and requires no specific coding knowledge.

Unreal Engine 4 game development software is one of the most professional game making software for PC available in the market. Unreal Engine lets you develop high-intensity games in quick fashion even for users who have limited or no understanding of coding.

Unreal Engine 4 offers a faster rendering process and potent editing tools to provide a real-life look to characters used in the games. Unreal Engine game development software enables users to make AI-enabled games and give the characters a certain level of consciousness.

How Unreal Engine Helps Design Your Own Video Game

Pricing: Unreal Engine 4 is a free & open source game making software that is easy to download.

Level: This game development software is suitable for beginners as well as professional developers.

One of the Most Downloaded Game Development Software for Beginners

Adventure Game Studio is an open source and one of the top game developers for action games such as point and click games. Adventure Game Studio free game making software makes use of C programming language to design games with a classic look and even high-resolution adventure games.

How Adventure Game Studio Helps Design Your Own Video Game

Adventure Game Studio can be downloaded free of cost as it is an open source software.

Level: Adventure game studio can be the appropriate starting point for a beginner to learn game designing.

CRYENGINE provides world class gaming experience for all developers irrespective of their budget constraints. CRYENGINE has ample of tutorials and game development documentation for beginners to refer to.

The game creation software has a dedicated community which provides support and utilities to game developers.

How Does CRYENGINE Help Design Your Own Video Games

Difficulty Level for Users: Apart from being suitable for beginners, CRYENGINE is used by Crytek for developing games such as Far Cry, Sniper: Ghost Warrior 2 etc.

One of the Best Software for Game Design by Professionals

Buildbox software makes the development of games acutely simpler for beginners due to a huge library of characters and other assets. With this free game development software, you can preview your game in almost real time. Buildbox works equally well on windows and macOS devices.

How Does Buildbox Help Design Your Own Video Games

Pricing: Buildbox has a free version available. The price of its Plus plan starts from ₹1467.50 per month. The plus plan provides features such as mobile export and adding the option of in-app purchases.

Difficulty Level for Users: Due to its interactive interface, Buildbox is suitable for novice game developers and requires no prior knowledge of any programming or scripting language.

Types of games: 2D and 3D games such as The Line Zen and Color Switch

One of the Best Software for 2D Game Makers

Stencyl website game maker is extensively used by beginners to design 2D games for mobile, tablets, desktop and web. With stencyl game creation software, you can design intuitive workflows which speed up the game development process.

Although stencyl requires no prior knowledge of coding, experienced developers can write their own custom classes.

How Does Stencyl Help Design Your Own Video Games

The paid plan starts from ₹7288.69 per year. It offers features such as publishing on steam and access to customer forums

Difficulty Level for Users: Stencyl website game maker has been designed for beginners. It can also be used by professional game developers

Enlisted here are the best free tools to help you create games with impressive video and sound quality. Also, you can manage different projects for game development in a hassle-free manner.

The software for sound design helps manage unattended recordings and schedule the timing of such recordings. Adjustment of audio pitch, vocal solutions and noise reduction are the other sound designing capabilities of Audacity.

How does Audacity help with sound designing:

Audacity is a free and open-source software for sound design.

Level: Audacity for sound design is a beginner friendly software with an intuitive user interface. The software is best for creating professional quality sound effects by students, young professionals and established veterans like soloists or orchestra leads.

Animation or animated transitions, all is easy with Visual Studio for 3D animation. The software is best for visualizing the spatial structure of animations.

How does Visual studio help with 3D animation:

The software offers a free trial version. Paid plans are:

Level: Visual Studio with its integrated development environment is easy to use. However, there are certain plugins that some may find a bit complicated to use. Beginners and professionals can go through the available tutorials for additional support.

Best for Drawing and Painting Programs

How does Krita help with 2D animation:

Level: Krita offers a smooth learning curve, something that makes the application beginner friendly. Also, available are a good number of video tutorials by Krita in case you want instruction material or some guidance.

Organise your game development projects into multiple boards with Trello. The list making platform helps prepare task boards using multiple columns so that you can classify the status of your projects into to do, ongoing/in-progress and done.

The work management and collaboration tool offers a visual framework for organizing effectively gaming projects and work. With Trello, you get access to cards, lists and boards for getting project overviews.

How does Trello help with organizing game development projects:

Trello Pricing: Trello has a free version available. There also exists a free trial version of its paid business plan. Price ranges of the two paid plans are:

Level: Trello is both popular and super easy to use.

Ready to Make a Game Without Coding? Try These Free Software for Making Games

If you have been thinking about developing your own game, you can do so by choosing some of the best game designing software from our list. All the above-mentioned game development software come with a free trial so you can try and test them as per your needs and buy a paid subscription only if the software suits you.

Canva vs Photoshop: Which Design Software to Choose?