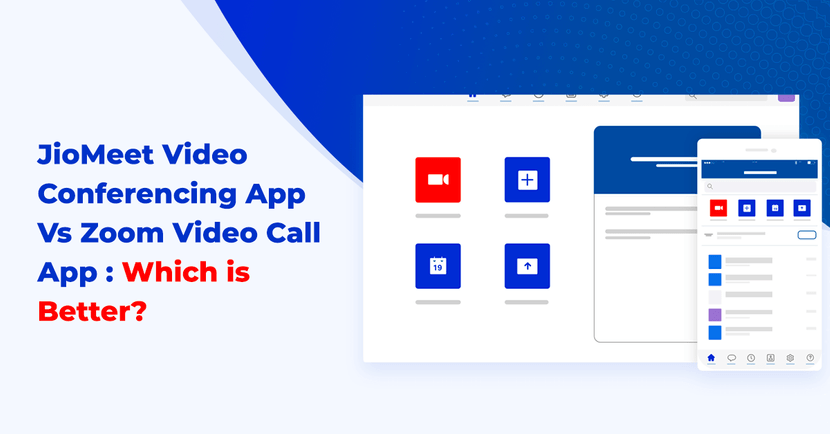 Since coronavirus has forced people to stay inside and work from home, online conferencing apps have become quite popular. For the past few months, the Indian workforce has been using Zoom video conferencing app, Microsoft Teams and Google Meet app for their office meetings.

Over time, there was a growing sentiment for an Indian video conferencing app that ensures the same level of ease in remote collaboration while being more sensitive towards the confidentiality of data. That demand now seems to be fulfilled with the arrival of the JioMeet conferencing app.

JioMeet app is currently available for download for Android and iOS mobile devices. JioMeet is a free video conferencing app, which means you don’t have to pay any subscription fee to sign up for its services. The web version of the app- JioMeet web is currently in development and it is speculated that JioMeet app download for PC and JioMeet for laptop would be available in the coming time.

A few days after its launch, JioMeet video conferencing app become one of the most downloaded video call apps. Not only Android and iOS devices, the number of JioMeet app downloads for PC have also substantially increased. Here we tell you how you can use the video chat app for holding high quality video calls for official or personal use.

Step 2: You will see a login and sign up option after doing JioMeet app download for PCand mobile phones. If you have an existing account on the JioMeet app, you can enter your credentials and login. First time users should select the signup option after they download JioMeet for Windows and other operating systems.

Step 3: Once you select the signup option, JoiMeet app will ask you to enter your details such as username, phone number and email id.

Step 4: The JioMeet app will then send an OTP on the phone number you just entered. Once you enter the OTP, the JioMeet PC app will verify it. After the verification is complete, you are successfully signed in and can start using the JioMeet for laptop app.

Step 5: Download JioMeet for Windows 10 and you can also log onto a call with the ‘Join a meeting’ option without having an account on the JioMeet app.

This made in India video conferencing app is laced with the following features:

In its current version, the JioMeet app supports up to 100 people to join on a video call. You can also utilize the JioMeet recording option to keep a record of live meetings.

JioMeet video calling app provides the feature for sharing your screen with your team members. This comes handy for several team members to collaborate on the same project.

JioMeet video conferencing app has the feature of safe driving mode which makes it easy to attend video call sessions while driving. However, for your safety, it is advised that you don’t use mobile devices while driving a vehicle.

Using this Indian video conferencing app, you can create accounts for five devices and switch between them during a video call without any issues. This is why we suggest JioMeet download in laptop, desktop and mobile devices.

Ever since its launch, people have been comparing JioMeet vs Zoom video conferencing app based on their features and functionalities.

We tell you which one is better, JioMeet vs Zoom, for your personal as well as professional use.

JioMeet Vs Zoom: The Similarities

Both Zoom and JioMeet for Windows 10, android and iOS offer user experience along the same lines. Although when it comes to user interface and the chat feature, JioMeet software ranks a few notches better than Zoom app. In fact, people have been demanding upgrades from Zoom in these two sections for some time now. Therefore, due to these two reasons, we recommend you download JioMeet for Windows 10.

Both the apps, JioMeet vs Zoom, share some other features such as:

But as more people opt for going vocal for local, JioMeet Indian video conferencing app is seeing high downloads with each passing day and is seeing more people root for it as compared to Zoom.

How JioMeet App Fares in Comparison with Google Meet

Google meet is one of the most popular online audio and video calling apps. In its latest update, you can directly access the app within your gmail app. Below we draw a comparison between Google Meet and JioMeet for Windows 10, android and iOS.

How JioMeet Fares in Comparison with Microsoft Teams?

Microsoft teams is another such popular remote working tool that has gained popularity during the pandemic. In addition to voice and video call, you can also connect to team members through chat. Below we compare Microsoft teams and JioMeet for Windows and other operating systems.

JioMeet video conferencing app is available for easy download on app stores. JioMeet app download can be initiated for PC and mobile devices. JioMeet for laptop is also available.

One of the most prominent persons batting for its robustness is Shri Amitabh Kant, Honorable CEO of NITI Aayog.

Through a Twitter post, Kant said that “Tried JioMeet Video Conferencing. It’s easy and simple! Better than Zoom. Meetings are encrypted and password protected. Unlimited high definition calls. All data in India. Emerges as a major technical disruptor from India. Will go places in these challenging times.”

The app developed by Reliance got a second thumbs up when chairman of the 15th Finance commission, Shri NK Singh suggested that meetings of the commission might take place on this app. This sets the record straight that in coming times, JioMeet video conferencing app might become the official platform for inter as well as intra communications held by subsidiaries of Indian Government.

Jio Meet app is already doing well across the android and iOS app markets. Reports suggest that JioMeet for PC and JioMeet web are on their way and Reliance may come out with a premium version of JioMeet soon. As for now, it can be safely said that the JioMeet video conferencing app is enjoying a grand welcome, riding high on the patriotic call for Atmanirbhar Bharat.

Why Choose Logitech Conference Solutions for Your Dynamic Workplace

Text Messaging for Customer Retention: Everything You Need to Know